An interview with Kale set before Purrfect Protector.

Interviewer fidgets and readjusts his grip on the pen and notepad once, fanning himself with the paper. This room was a furnace. Stunning male model Kale Andrews enters the room and the interviewer's heart beats faster with excitement.

Kale pulls out the white fabric of the fitted shirt and lets it go, blowing out an irritated breath.

Interviewer: Yes it is.

Interviewer flicks the pages of the notepad.

Kale wrinkles his nose as if the thought is unpleasant.

Interviewer writes in the notepad.

Interviewer: Do you love your fans as much as they love you?

Kale jolts as if surprised.

Interviewer: I mean…you must get a lot of attention and have a lot of fans, being in the spotlight and being so beautiful and perfect. You must attract a lot of people.

The door opens unexpectedly and both Kale and interviewer are startled as another man, Kale Andrew's manager and pesky brother enters without knocking.

Manager: What are you doing, Kale?

Kale: I'm doing an interview like you told me to do—

Manager: No, I said it was upstairs and the woman from the magazine left when you didn’t show up.

Both Kale and Manager spin to stare at Interviewer. Interviewer shrugs and holds up the notepad and pen he had been writing with and gives them a fake smile.

Interviewer: Sorry. I thought I could take a chance and impress my editor by getting an exclusive.

Kale relaxes while Manager glares and ushers Kale from the room, slamming the door behind them.

Interview creeps to the door to eavesdrop on the object of his affection.

Kale: What are you doing here, bro?

Manager: Don’t bro me. You know we have an appointment with Mr McCade in half an hour.

Kale: Fine, let’s get this over with then.

The pair walk off down the hall and out of sight.

Interviewer slams the notepad on nearby table in anger, staring at the filled pages where over and over he had scrawled Kale Andrews.

Interviewer: Soon you will be mine. I'll see you soon, my love. 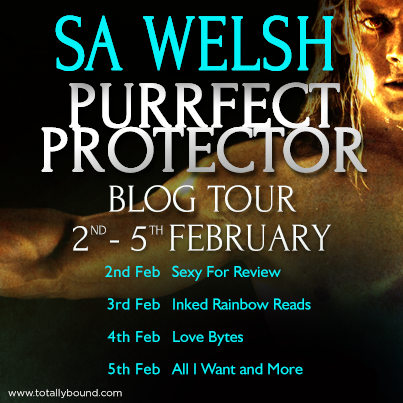 Excerpt from Purrfect Protector-
“Well, Mr. Andrews, it appears there is nothing we can do for you.” Scott McCade clasped his hands together and leaned back in his chair.

Mr. McCade cut him off with a wave of his hand. “I was talking to your brother. He seems to be the one with the sense.”

Shocked, Kale sat back. What had he done to deserve such a dismissal?

“Please. Despite what my brother thinks, this is serious. It started with a few letters every month or so, then every week to every day, and now he’s getting packages like this with cards saying ‘I’ll be watching over you, my love’. This is escalating and I don’t want to wait around to see what comes next. The hotel security where my brother lives had a breach yesterday when an unidentified male managed to gain access to Kale’s floor. I can’t always be with him when he’s on a campaign or at an event, and I don’t think I’m much protection when I am. I need your company’s help.”

Kale shot a sideways glance at Caleb. His brother was putting it on a bit thick. Sure, he had a fan who was more than a little creepy, but that was it. His hotel housed some very famous people—far more famous than him—and they didn’t take security lightly.

Caleb tightened his jaw and the vein on this brother’s forehead pulsed. His brother was really scared about this.

Mr. McCade sat forward again and placed his hands on the stack of letters Kale guessed were addressed to him or Caleb. “I can offer several protection options, but unless your brother agrees, there is nothing we can do to protect him.”

“I agree,” Kale said quietly. If he’d thought all this had really bothered Caleb so much, he wouldn’t have been so difficult. This is book one in the Shifter Protection Specialists Inc. series, see the full series listing here

Never play cat and mouse with a saber-tooth tiger.
When Kale Andrews gets disturbing mail from an obsessed fan, his brother drags him to Shifter Protection Specialists, Inc. Kale reluctantly agrees to have a bodyguard, but when a tall, muscular blond walks into the office emanating power and a sexy dose of danger, Kale’s doubts about needing the man with him twenty-four hours a day quickly disappear.
The easy babysitting job Aleksi was promised quickly changes from strange mail to threatening deliveries, so Aleksi has to become creative to keep his protectee out of danger. Everyone knows models are self-centered and shallow, so why does being with Kale make him feel like he finally has a home? Since he’s a saber-tooth tiger and naturally dominant, most people aren’t strong enough to be with him in a relationship or even as a friend. Yet Kale seems to calm his beast, simultaneously exciting the man in Aleksi.
Neither man expects nor wants a relationship with strings, but as they grow closer, Aleksi realizes that Kale might be his mate. With an obsessed fan escalating toward murder, Aleksi isn’t sure that even his tiger can keep his mate safe.

Like the sound of Purrfect Protector? Buy it here.

About SA Welsh:
I'm SA Welsh and I write because the voices in my head keep making me. I love reading and I love letting the characters and stories in my head come to life in a book. I can't function in the morning without a cup of tea and when I'm not writing I'm reading. I have enough books to last me through an apocalypse but don’t ask me to share them unless you are a fellow book worm and know how to treat and appreciate a good book. It is thanks to the writers that inspired me to put myself out there that I became an author and the editors that make sense of my chaos that I keep writing.
You can also follow SA on Twitter.

Enter Totally Bound’sFebruary blog competition for a chance to win an eBook of your choice!