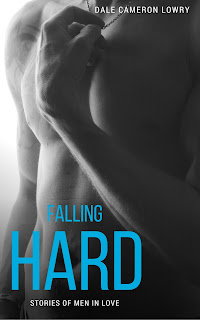 
Here are just a few of the stories in Falling Hard:


I was getting my tablet out when he strolled in. I swear I stopped breathing as soon as I looked up and saw him. Or rather, his ass. My eyes stopped before they could go any higher. He was wearing a pair of mustard-colored stretch jeans with a back seam that perfectly split his behind into two succulent buns as round and steaming as a pair of dinner rolls fresh out of the oven. I like to tell people I fell in love with him at first sight. But let’s be honest: It was pure, unadulterated lust. I’d never seen such an appetizing ass, and it wasn’t for want of looking. I’d spent my first year of college shaking off my conservative Idaho upbringing and transforming myself into a proud gay slut, burying my sheathed cock in as many manly bottoms as presented themselves to me. My favorites were the repressed macho football player-types who pretended to be tops until the clothes came off, then begged for a good pounding as soon as I skirted a spit-slicked finger over their puckers. If they wanted me to spank and bite their pretty keisters, well, all the better. I loved the springiness of a well muscled tush and would have been happy to prod and poke the best of them for hours, if only my dick would last so long. But Michael’s ass was even better than a quarterback’s rippling derrière. No amount of working out could have created such perky perfection. It was a gift from God, more beautiful than the smooth marble rump of Michelangelo’s David. “Um, hello?” A voice came from somewhere above my head. The person owning the flawless backside turned around, removing it from my field of vision and replacing it with an equally flawless frontside. I’m pretty sure my gasp was audible. He had a bulge as big as Mount Rainier. It was more than my mind could comprehend at such an early hour. I looked for something less intimidating to focus on, my eyes skimming over his fitted blue polo shirt and caramel arms until I found his face. I probably gasped again. The man was gorgeous, with a plump, kissable mouth and chocolate brown eyes rimmed with velvety lashes. “Er, hi.” His lips curled into a lopsided grin. His teeth showed when he smiled. They were perfect—not too big and too small, and slightly rounded at the corners instead of sharp squares. They reminded me of freshwater pearls. One of his teeth in the bottom row was slightly crooked, which lent a laissez-faire sort of joy to his grin. I liked that. He sat down next to me, all casual, as if getting visually groped by other guys was an everyday occurrence for him. “You an ass man, huh?” Heat spread from my chest to my ears. When I blush, I turn the approximate color of a cherry Froot Loop. Not what I wanted to look like at the moment—not if I wanted to make a good impression on Mr. Perfect Ass. “Sorry. I wasn’t trying to, um, objectify you. Or make you uncomfortable.” His smile grew. “I’m not uncomfortable. As for objectifying me, we can start the de-objectification process as soon as class is over if you let me take you out for coffee. We’ll get to know each other as the multifaceted human beings we are.” He looked me up and down, his eyes lingering on my chest. I’d been doing a lot of weights that summer, and it was in the best shape it had ever been. I was glad I’d chosen a tight gray T-shirt that morning to show off its contours. He raised one eyebrow and leaned in close, like he had a secret to share. “And maybe I’ll learn to stop objectifying you.”

Falling Hard is currently available through the secure downloading platform PayHip, Amazon, Apple, and other sellers worldwide. You can read a preview and find sales outlets at:

To celebrate the release of Falling Hard, Dale is running a giveaway. The prize is one of Dale's short romances that is not in the anthology: Love Unmasked, a lighthearted romance about Aaron Loreto, a gay man who's been unlucky in love because he occasionally turns into a raccoon. For some reason, his ex-boyfriend didn't like the way he'd spend all night digging through the trash. But somewhere out there is a guy who's more understanding, and Aaron might just have found him at his favorite coffee shop. You can enter every day to increase your chances. Enjoy! (If you can't see the Rafflecopter giveaway here, go to www.dalecameronlowry.com/falling-hard-giveaway/ to enter.) a Rafflecopter giveaway


style="font-weight: 400;">Dale Cameron Lowry lives in the Upper Midwest with a partner and three cats, one of whom enjoys eating dish towels, quilts, and wool socks. It’s up to you to guess whether the fabric eater is one of the cats or the partner. When not busy mending items destroyed by the aforementioned fabric eater, Dale is a writer and editor who enjoys wasting time on Tumblr, listening to podcasts, studying anatomy, getting annoyed at Duolingo, and reading fairy tales. Previous careers include sign language linguist, grocery store clerk, journalist, gardener, and camp counselor.

Dale began writing for fun at the age of eight and has been making up stories ever since, from overly workshopped literary fiction to off-the-cuff fanfic. Queer Mormons have a way of popping up in Dale's work, whether it's romance or erotica, sci fi or fairy tales, slice-of-life contemporary fiction or spine-tingling horror. So do immigrants and emigrants, people with disabilities, multilingual folks, and others who live their lives navigating multiple cultures.